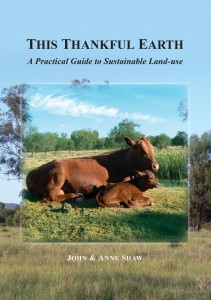 About the project
John and Anne Shaw brought us their book, it had already been printed, though they wanted to convert it in to an ebook. After a few revisions and some technical issues, we soon brought together a robust epub and mobi file.

The book contains several photos and the entire conversion was based off of a manuscript in Microsoft Word, there was no internal design.

About the book
When an elderly couple bought a run-down farm near a small town in southern Queensland, Australia, their neighbours thought the old people were just enjoying their retirement on a ‘hobby block’. It took a while for the message to sink in that these old folk were about to challenge long-held local myths about land and farming. Soon it was seen that water was being pumped from a bore which had previously been declared ‘dry’.  Then there came strange cattle which no-one had ever heard of. New fences replaced the old dilapidated fences. Edible grasses and clovers replaced the tough, spikey weeds which had infested the farm. Trees were planted and thrived despite a lack of irrigation. The farm became prosperous again.

Written in anecdotal style with snippets of humour and thirty photographs this book outlines how and why John and Anne enabled the farm, ‘Carlton’, to regain its lost fertility without spending a lot of money. It shows how an understanding and respect for the environment, coupled with a broad education and experience in farming, enabled this elderly pair to change a dust-bowl into a productive and lovely farm.

Agriculture and the environment, working in harmony, can achieve better outcomes for both than if they are in isolation.  There is a need for education for all in farming, and a system for the accreditation of farmers which recognises their professionalism. But there are also people who use the land for building cities and transport infrastructure, mines and national parks and forests.  All these people need to be aware or their responsibilities because any misuse of land will have bad effects on other land, such as floods and land-slips, noxious weeds and feral animals. Governments need to ensure that all land is used wisely.

The elderly couple finally decided that they should retire from the farm. At about eighty years of age, that seems reasonable, but in writing their book they are carrying on with their mission, to change the way Australians see the land so that droughts and floods and debt cease to be the norm in rural Australia.