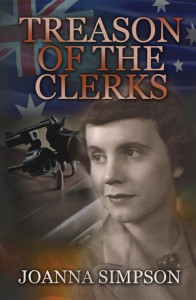 About the project
We created the print layout and cover design. Once the print edition was designed we sent it to the customer as print-ready pdfs for them to send to their own printer.

About the book
It is the late 1940’s during the Cold War. A young woman, working for the public service in Canberra becomes involved in the hunt for a compromising document on the establishment of U.S. bases in the Northern Territory. A man is found murdered. Was he somehow linked to the missing papers? Has someone committed treason? Who? Why? How? These are the questions Anne and her friends face until they reach the final and unexpected conclusion.

About the author
Joanna Erlistoun Thomson was born in 1926, the elder child  of a British  father  and an Australian mother.  Her father, Lt Col David Thomson DSO MC, was   a gunner officer, then retired; he came of a military family  with  long traditions of  service  in the Indian army, in the famous cavalry regiment   known as Skinner’s Horse.   Her mother was the  daughter of   Sir  William Mitchell,  a distinguished philosopher, later vice chancellor and chancellor in  the University of Adelaide. Throughout her life, in her work and in human relations, Joanna  possessed  unpretentious  courage  and loyalty,  and  was committed to academic excellence.

She was born in London, but grew up in Northamptonshire, near Braunston,  where her parents owned a house .   As a child, she saw the outbreak of the Second World War only as a threat to her pony: she feared that it would be commandeered for military service.  However, in July1940, when serious air raids began and both her parents  were  serving  in the defence of Britain,  Joanna  and  her brother William  were  sent by sea  to Australia.  Aged 14 and 12, the children were not accompanied by a family member; their ship had no naval escort, and  their voyage to Fremantle lasted some five weeks.

In Adelaide they were placed in private boarding schools, where both did well.  In   1944, Joanna entered the University of Adelaide, studying English, Physics, and French,  gaining credits in these  subjects.  As a student, she made many friends; these included Don Dunstan,  later the brilliant  premier  of South Australia, and also Donald Simpson, her future husband.

In 1946, before she had completed her BA degree in Adelaide, she  applied  for  an appointment  in the  Federal  Department  of External Affairs, now the Department of Foreign Affairs & Trade.  To her surprise, she was accepted, and went to Canberra  as a diplomatic cadet.  For two years, she attended the University of Canberra, studying English Language & Literature,  Economics, and Economic History.  Passing these subjects with credit in the first, she obtained her BA degree in  1948,  and was graded as a Third Secretary.  In the following year, she was posted to  Ottawa in the office of the  Australian High  Commissioner.

Joanna enjoyed her years in diplomacy.  She liked Canberra. As her novel shows, the national capital was still a country town  of  about 20 000 inhabitants. Parliament House was twenty years old, and the Hotel Canberra [‘Hot Can’] was already a political legend, but accommodation for the diplomatic cadets was not palatial. Together with other cadets, Joanna boarded in a hostel called Brassey House. Inconvenienced by 40 watt globes in their rooms, the cadets tampered with the fuses in the hostel: thick wire was inserted, allowing the cadets unlimited illumination, and an imaginative magazine later published a cartoon showing many electrical appliances powered from a single light socket. Joanna claimed to be the instigator of this and was one of eight cadets who were evicted when their ingenuity was discovered.  They protested that they needed the light for their final examinations.

Like the heroine in her novel, Joanna travelled around Canberra by  bicycle,  and sometimes  shared   the roads  with a mob of sheep.   She made many friends among her fellow cadets.  Some were her contemporaries, and others  were older, being  ex-servicemen with  recent wartime experience.  When she created the characters in her novel, she  contrasted her heroine’s  naïve  thinking  with   older characters  with  more informed   approaches to events in her story.

She took her work seriously, and worked hard.  In her time, the minister responsible for foreign   affairs was H V (Bert) Evatt.   He had held this   ministry since 1941, and   did so until 1949 , the year given for the events in her novel. Under him, Australian diplomacy played a vigorous role in developing the newly formed United Nations, coupled with furthering Evatt’s personal ambitions. According to his biographer Geoffrey Bolton ,Evatt’s attitude to his staff was often demanding, hectoring, and inconsiderate;  Joanna was made aware of this by senior friends in her  department.  It may be because of this that her novel contains no  ministerial   figure  in the position occupied by Evatt,  and she was careful to assure her readers  that no living person “however illustrious” was  portrayed.

Joanna also enjoyed Canada.  The Ottawa office was understaffed, and she had to carry  heavy  responsibilities;  these were even heavier  when she was seconded to  the United Nations.  At this time, the Cold War was intense,  and she  heard a   presentation by a European delegate who was later executed  after a show trial in his own country.

In 1951, she became engaged to Donald Simpson, whom she married in 1952.  At that time, marriage meant for women compulsory resignation from  the diplomatic service,  and she insisted on  deferring her marriage for at least  a year.  She wished to demonstrate that women diplomats were  reliable.

For the next few years, Joanna lived the demanding life of a neurosurgical wife and a young mother.  Her daughter Jane was born in 1953 in London, and her son Matthew in 1955 in Oxford, where her husband completed his training in neurosurgery.  Nevertheless, she was able to keep in touch with  the diplomatic world,  from  publications  and by  correspondence with  her former colleagues.   In   1956, she and her family returned to Adelaide by sea.  Her third child Katherine was born, in 1958.   Although exact dating is not possible it is likely that it was at this time that she wrote her novel.

Espionage among diplomats was then topical.  In 1951, the British diplomats Guy Burgess and Donald Maclean defected to Russia, and  were identified as longstanding agents of the USSR.    In 1954, Vladimir Petrov, a bibulous Russian junior diplomat and senior officer in the KGB, defected with his wife from the Russian Embassy in Canberra, taking with him documents which were thought to  point  to espionage by Communists within the Department of External Affairs.  Petrov alleged that several named Australian diplomats were Soviet agents.  A Royal Commission was formed, but after careful investigation, nothing was found  to justify charges of treason or anything else against persons named by Petrov.  The Commission’s report attracted much attention in Australia, especially when Evatt, by then the Leader of the Opposition in Parliament foolishly asked V. N. Molotov the foreign minister of the USSR to deny the authenticity of Petrov’s documents.

Joanna had been acquainted with  Ian Milner  and Ric Throssell,  two of the persons named by Petrov,  though  they were not among her  close friends.   Both were exonerated, but the Commission   brought into question the loyalty of anyone  who felt a higher duty towards the Communist Party,   and this cause of treason was given great prominence in a book which   probably influenced Joanna’s thinking.  This was The Meaning of Treason, by Rebecca West.    In 1949, this brilliant writer had excoriated those persons who had assisted Nazi Germany during the Second World War; in a revised edition published in 1956, she   did  the same for   traitors who served the interests of Communism. This edition included an account of Petrov’s defection.  Joanna read this book not long after it appeared, and it is likely that she drew on it.  In    her novel, when the traitor is unmasked but still defiant, Joanna makes clear that she herself saw the treason as repulsive, and its Marxist justification as wrong, and also as  desperately silly. But she never condemned her acquaintances who remained  Communist sympathisers, and she found McCarthyism disgusting.

It is  interesting that in her novel, when her characters debated the ethics of treason and considered whether it can ever be justified, two speakers remembered the German officers who tried to assassinate Adolf Hitler on July 20, 1944. This reads as if inspired by John Wheeler – Bennett’s book    The Nemesis of Power, a study of the political history of the German army, which she had certainly read.  There are also passages that may reflect conversations with her husband’s German friend Dr Conrad Josten, whose fear of what Hitler threatened to do had made him, and his friends, engage in what was called high treason against the  Nazi government.   But interesting though it is to consider what Joanna may have drawn from books and from people whom she had met, it is certain that her book has deeper roots. Those who loved and admired her know that her loyalty, in her work and in her human relationships, was intrinsic and durable; it remained a strong guiding light until her death  on 1 September 2007.

Joanna Simpson wrote her first and only completed   novel, probably when she was aged about 32 years,  though the   date is uncertain  It  was never published in Joanna’s lifetime; she  submitted her typescript to some person whose judgement she valued, and was advised against publication. We do not know who gave her this advice, nor on what grounds.   She began a second  novel,  but  abandoned it at an early  stage.

Later, Joanna travelled widely, and in 1962 she visited the USSR, where one of her friends was  the  Australian ambassador. This visit deepened her interest  in  foreign  languages  and cultures:  she  studied  these in  various universities in Australia and Japan,  and  she promoted their  study in the University of Adelaide.  She did this by a substantial bequest, carefully planned to foster studies in languages other than English.   Her novel survived its author:  though  the novelist disclaimed  any  attempt to portray  any living persons,  she  gave a convincing picture of   young professionals  confronted by an unfamiliar crisis.    The novel also describes the city of Canberra at  an important time in Australian  history,  now forgotten,  and  it  reflects the author’s unusual  life and personality. 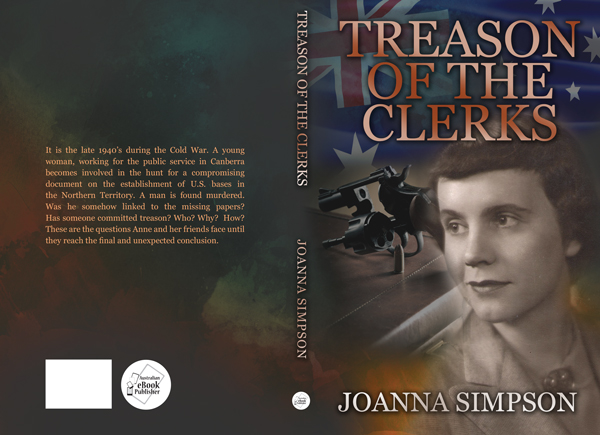 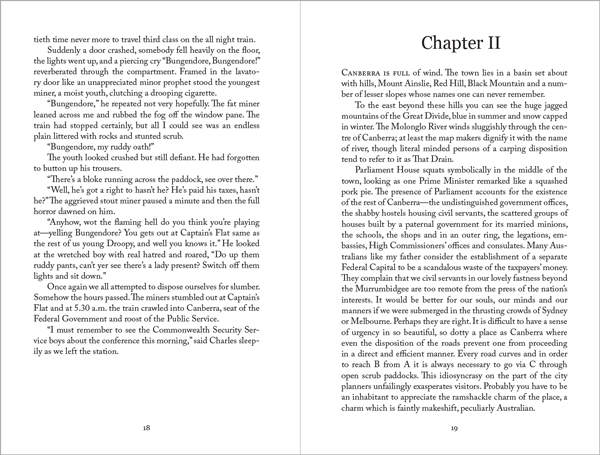