About the project
We were supplied a Word document for this book and converted it to standard reflowing epub and mobi. We applied our Designer's Touch™ to the manuscript, giving it some nice fonts for the headings, and ensuring all images were nicely presented. We also designed the front cover, using an image supplied by the customer. It was great to work with Van and we wish her every success for her book.

Book Information
‘The Dream That Comes True’ describes the journey of a Vietnamese family spreading through four generations, from the story-teller’s great grandparents through her grandparents, her parents and her and her siblings. The journey started from an impoverish village in China, through Vietnam and ended in Australia. When she first set foot on Australian soil one early morning in August in 1995 to reunite with her family as its last member to come to Australia, the story-teller did not anticipate it would be the turning point that would transform her from an ordinary dressmaker in Vietnam with incomplete secondary education to a registered nurse with a Master of Public Health by 2010. Throughout her family journey to combat against the hardship that they experienced living and growing up in a war-torn Vietnam, and the persecution that they endured by the communists due to her father’s position in the previous government in the town of Vũng Tàu after the fall of the Sài Gòn regime; the family showed their resilience, persistence and aspiration for a better life, the life that was denied to them in their own country because of political reasons. Ten of her brothers and sisters only managed to escape Vietnam by boat by working for people smugglers because they couldn’t afford the trip. Coming to Australia as refugees and immigrants with limited education and a determined not to be marginalized, the fourth generation of the family had to work and study hard to fulfil their dream of a better life in the land of promise. That effort has fruited with ordinary but inspiring achievement: integrating into mainstream Australia. 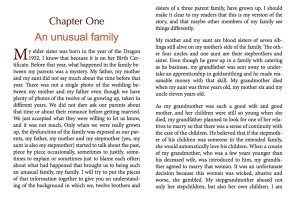