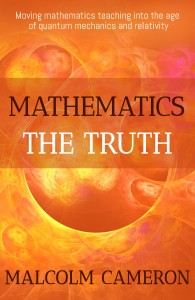 About the project
We first did the cover design. After this was finalised we created the ebook. With the ebook edition completed we created pamphlets for marketing.

About the book
‘Mathematics the Truth: Moving mathematics teaching into the age of quantum mechanics and relativity’ by Malcolm Cameron

Currently mathematics is taught like a Latin, without motivation, restricted to the period from Euclid in the BC to the Renaissance.

This thinking degrades mathematics which is fundamental. Without mathematics sciences are merely observational nature study, engineering is trial and error, while technology is only training in use of imported stuff anyway.

Mathematics is the great philosophical basis for understanding the universe from the Quantum to Cosmology and Relativity, its history and future. Citizens ought to know what is happening in these subjects, and in experiments probing the structure of the universe, at least in concept.

We must at least note where classical mathematics and physics are in error giving a lead for future understanding of quantum computing, for example, and for many biological and physical phenomena. Reference to the unknown, the un-understood, and the unexpected are the major motivation to understand any subject.

‘Mathematics the Truth’ is suitable for use in upper secondary schools, but will be golden to anyone interested in mathematics from the true angle.

You will never look at mathematics in the same way again