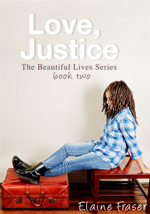 This was a long creative process, but it was well worth the effort. Elaine had Love, Justice (the second book in her Beautiful Lives series) professionally edited before she handed the manuscript to us. We designed the book for print, including the cover, based on her previous book’s design. After the print layout was finished we converted the book to reflowing epub and mobi. We also coordinated the offset printing of 500 copies as well as aggregating the ebook to vendors.

Justice sees the injustice in the world and gets frustrated that she can’t do anything significant about it. She has a sponsor child in Rwanda, but she wants to do so much more.

World peace, an end to end poverty and justice for all become her goals, especially after she meets Seth, the charismatic boy with dreadlocks and sea-green eyes at a peace rally.

Just when she is figuring things out and becoming involved in the peace movement, her father returns. He brings Emily with him, a young woman who is now supposed to become a part of their family.

Dad assumes they will accept Emily, but has no concept of the emotions this will stir up.

Sometimes life isn’t fair, but we have to find a way to do the right thing.