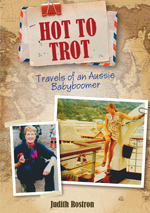 About the project
Judith came to us with a beautifully designed print book that was all laid out. We converted her book to reflowing ebook, making sure that it kept the original design. This project was relatively straightforward and working with Judith was a pleasure. We wish her good luck!

About the book
Solo or in a small group Judith Rostron has been able to travel behind the tourist waterfall and investigate minority peoples in places where there are rarely tourists. But when you travel alone - travelling takes on a new dimension...

In this memoir Judith takes you all over the world to places including Central America, Laos, Burma, Shetland, southern France and remote parts of China which revealed glimpses of medieval life in a world trying to grab hold of the twenty-first century.

Apart from almost four years living in the UK in the 1970s Judith Rostron has lived in Sydney with her family. She spent four years teaching English as a second language and is now an artist. She has been exhibiting regularly for almost 15 years.